Don’t fall for ‘Fool-a-ru’ in the quest for Uluru!

Uluru is one of Australia’s iconic natural landmarks with many making a beeline on an Uluru sightseeing tour for this location that is steeped in Aboriginal culture. Scaling or walking around Ayers Rock is one of the chief things to do in Uluru and an integral part of all activities. At a height of 348 mts (1,142 ft), Uluru is an inselberg, which is an ‘Island Mountain’. Quick geography lesson: Inselbergs are prominent knobs of landmasses that rise abruptly from the surface and are surrounded by flat lowlands.

Well, to the bewilderment of many tourists, there is a second inselberg close by that many mistake for Uluru! Attila (which is the Aboriginal name) is almost a perfect doppelganger, save for one or two obvious features, but you really can’t blame people for mistaking it for Uluru! When you’re journeying in a coach for many hours, passing through vast and endless arid land with only Uluru on your mind, the chances are you will see Atilla and believe you’ve arrived at your destination! As many people have made this mistake over the years, Attila is known locally as ‘Fool-a-ru’ and is an inside joke among the local tourism industry operators.

So what are the obvious features which you can use to easily to differentiate between Uluru and Attila? Well, for starters, Attila is almost three times larger than Uluru and the peak is more flat and slightly taller, whereas Uluru has a slight dome-ish appearance. Attila is also known as Mt. Connor, and you see it first when journeying from King’s Canyon, so that’s another way of telling the two apart.

Both are sandstone structures, and like Uluru which changes colour at different times of the day and year, Attila also shows the same characteristics. This change in colour is most visible at sunrise and sunset when it glows a deep red. There are shape differences between the two as well, but it isn’t apparent from the ground level. From the skies, Attila has a unique horseshoe-shape unlike that of Uluru. Uluru has Lake Amadeus nearby, a vast salt lake; Attila also has a salt lake of its own known as Lake Swanson, but is much smaller in size.

Unlike Uluru which is more open to the public, Attila is on private property and you need to obtain special permission to visit the area. Owned by the Severins, it’s a family property but they conduct guided tours around the place. Attila is also an easier climb than Uluru, with the slopes less steeper and you get to see some great fossil relics along the way.

So if you live life off the beaten track, why not head to Attila for a real adventure out on the Aussie Outback! Attila might not have the oomph-factor of Uluru, but you will have many tales to tell your friends and family back at home, and not to mention priceless views! 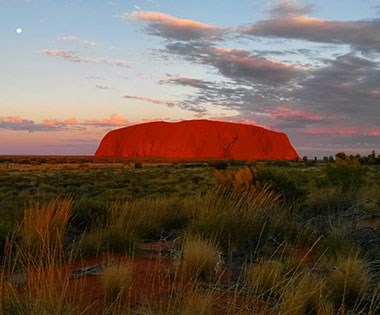 Uluru – What To Know Before You Go!