Sydney Harbour, the Kohinoor of the city, is the first thing that comes to mind when you think of top attractions in Sydney. The entire city structure revolves around its harbour, so do the major events held here. Hence, seeing Sydney by ferry is hands down the best way to go! Check out where and how to explore Sydney by its waterway from Circular Quay...

Taronga Zoo
A 15-minute ferry from Circular Quay is all you need to reach this wildlife retreat. With a variety of flora and fauna mimicking Aussie wilds to perfection, Taronga is the best place from some up-close rendezvous with native animals like koalas, kangaroos, wombats and more. The crowd faves include a bird show, featuring colourful & tropical winged natives, and a seal show where you can say hi to Californian & Australian sea lions and New Zealand fur seals. The chance to see giraffes poking over the fence as your ferry approaches is the icing on the cake on this trip!

Sydney Olympic Park
Developed for the 2000 Olympics held in Sydney, the Park is the base for the Royal Easter Show, Sydney Festival and ANZ Stadium! With its parklands, sporting venues, entertainment centres and behind-the-scenes tours, you’ll never run short of options to explore here! Just an hour’s ride from Circular Quay, this place also has a kid’s area with a free gigantic Olympic Cauldron with cascading water effects! Fun times are a promise at the Sydney Olympic Park!

Darling Harbour
‘Buzzy and happening’ define this harbour area the best! The hub of all harbour activities in the city, attractions here are present by the ton. Be it the Sea Life Aquarium, Madame Tussauds, Wildlife Sydney Zoo, Hard Rock Café or just some idle time by the water, Darling Harbour is all about fun activity you can indulge in. You’ll lose track of time exploring the many venues at this one! That too, its just a 20-minute ferry ride from the Circular Quay. Ferry rides going under the Harbour Bridge and around the Opera House are a bonus!

Cockatoo Island
An Aboriginal fishing spot that turned into a convict prison and eventually became a leading dockyard and shipbuilding site. This is the story of the island named after the loud sulphur-crested parrots squawking of their ownership at high-decibels all around it! Largest of its kind on Sydney Harbour, it is also a well-sought after cultural venue, surrounded by scenic sights all around. The Maritime Trail that takes you down to the basics of ship design and docks precincts, and the Convict Trail tours that tell tales of the convicts are a must-do here!

With scores of ferries lining Circular Quay, opting for a hop-on, hop off ferry is the best option if you plan to visit Sydney’s top attractions in a day. A Sydney Attractions pass offering discounted entries to two or more attractions with a single ticket is also the best bargain you can get! Make the harbour city your own and explore Sydney like an Aussie would! 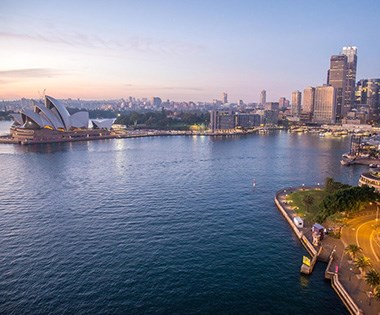