Sports Is A Way Of Life In Melbourne!

Sports and Melbourne are akin to wine and cheese – everyone’s a fan! In fact, sport to Melbournians is almost a religion, with almost everyone taking the day off and heading to the stadiums, to declare their support for the home team! Most of the sporting activities in Melbourne result in an impromptu shutdown of the city, and believe it or not, there are a lot of them! Melbourne is home to both national and international sporting events of great repute.

‘Aussie Rules Football’ is the sport that rules the roost and almost all matches are sold out. Watch the matches not for the sport, but to experience the fierce loyalty and passion that Melbournians in particular, and Aussies in general, share for sport! The finals are generally a packed affair at the Melbourne Cricket Ground, which is considered the ‘spiritual home’ of the game. This football-rugby-cricket-handball hybrid sport has become so popular among the Europeans that the Australian Football League European Championship is now one of the biggest tournaments in Europe (surprising for a continent whose love for traditional football is unmatched).

Cricket, basketball and hockey also have their pundits and Melbourne has a strong team for each sport, with plenty of silverware to their credit. Melbourne is also a city for motorsport enthusiasts, with many racetracks around the city hosting many international events like Formula 1, V8 Supercars, Moto GP, as well as the Superbike World Championship. Soccer, rugby and basketball also find audiences within this crowded, sports-crazy city.

The Australian Open tennis tournament brings together the bigwigs in the business every year in January, with every player giving their best to win the first Grand Slam of the season. The Great Ocean Road acts as the perfect velodrome to host cycling events, with the coastal road offering the best views for the cyclists, as well as the audience!

Melbourne Carnival Cup is to Australia, what Super Bowl is to the United States and Wimbledon is to England. This prestigious annual thoroughbred horse race attracts enthusiasts from the all over the country and the world as well. The entire city drops everything to be at the race course where these enthralling races join forces with various cultural events. With the average Aussie’s favourite combination of wine and sport, the locals aptly call it ‘the race that stops a nation’!

Such genuine love for sports makes it a festivity for the Melbournians. Events like Neon Run are made fun with DJs and dance nights, encouraging people to adopt an active lifestyle. Even oldies keep themselves fit by participating in events like Melbourne Coastrek, Melbourne Run and so on. But the best part is that most of these events raise funds for a deserving cause!

Sports fanatic or not, if you get into the thick of things at a sporting event in Melbourne, you’ll discover a love for sport you never knew you had before! 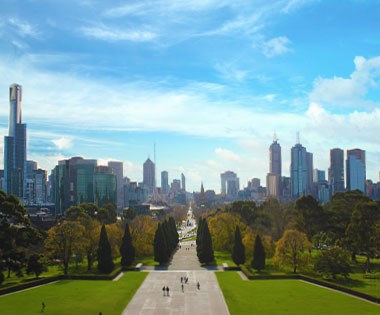 A Small-City Feel In A Big Modern Metropolis!