Capitals around the world are usually the most influential city of the country holding the heritage and long history, but Australia breaks the norm by bestowing this designation to a ‘purpose-built city’ which is now the world’s youngest capital! Read on and learn more about the history and know what’s on in Canberra.

When the Government failed to find an answer to the squabble of whether Sydney or Canberra could take up this designation, came up the idea of building a city in between as a conurbation to these cities. Thus began the creation of the capital city in 1908. The city’s design was picked from an international contest to find the ideal blueprint. American architects Walter Burley Griffin and Marion Mahony Griffin tailored the design with many geometric motifs, aligned perfectly with the topographical landmarks. Today with a population of around 0.4 million, Canberra is the largest inland city and eighth largest overall.

But this city is much more than the seat of Government housing many federal ministries including Parliament House, the official residence of Governor-General, the High Court and numerous other official departments. Canberra is home to a number of indoor attractions that you can pay a visit to, starting with the Australian War Memorial, National Museum and National Library to name a few, showcasing the heritage and history of the country.

Beyond the customaries of an executive area, Canberra is a city for the ones who love spending their time outdoors. Boasting a beautiful open planning that incorporates significant areas of natural vegetation, you’ll never be short of things to do in Canberra! Experience top tours and activities in Canberra and learn what makes it a perfect place to get off your heels and get on wheels. The lakeside paths, winding roads and hillside trails proffer you a ride of lifetime.

Far more than its profile of a public service town, this administrative centre has built an urban culture of its own with terrific foodie destinations, coffee spots, art & theatre and fashion hub. The recent precincts like NewActon and Kingston Foreshore around Lake Burley Griffin add to the cosmopolitan ambience, right at the city’s heart. Canberra has many venues for live music and theatre like the Canberra Theatre, Albert Hall, Playhouse and so on, which hosts many major concerts and productions.

The city is also developing a reputation for its festivals. Floriade, National Folk Festival, the Canberra Writers Festival, Enlighten (to name a few) are some major draw cards that bring thousands of natives and tourists to Canberra every year.

The heat of Australian politics calls for a chill wine-break and so is the capital fast growing with elegant wineries and cellar doors. The wine scene here is much more than just producing outstanding Shiraz and Riesling; this small urban space is living quarters to some of the country’s exceptional winemakers and hosting famous wine festivals.

Canberra has that little something for everyone. This contemporary metropolis is indeed ‘carefully & well’ planned locale cajoling you with its diversity of attractions and plethora of activities. So when in Australia, is the capital city a destination you want to miss? 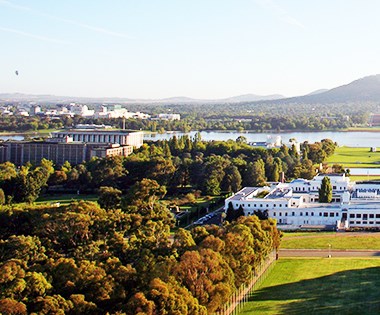