The Myths That Lend Mystery To The Three Sisters

The Three Sisters is an attraction that has become synonymous with the Blue Mountains, New South Wales. This trio of sandstone rocks towers over the Jamison Valley, with the blue-ridge mountains stretching to infinity in the horizon, attracting millions of tourists every year! So much so that, it has turned into a must-halt on all Blue Mountains tours from Sydney!

Over 300 million years in the making, this landscape was once the floor of a shallow sea. Weather-beaten over millions of years, the sea receded and the seabed was crushed and squashed into rock. The remaining creeks and rivers spent a few more million years carving out plateaus, cliffs and mountains that are now iconic vantage points and attractions at Blue Mountains!

To make things a little more interesting, we’ll let the geographical changes take a backseat! Let’s learn more about the two Aboriginal legends that supposedly led to creation of the Three Sisters – one is a tale of forbidden love, the other about a Gundungurra magic man, his three beautiful daughters, and a terrifying Bunyip (mythical creature from Aboriginal mythology)!

The Curse of Forbidden Love

This legend is a heart-wrenching love story about three sisters who belonged to the Katoomba tribe in Jamison Valley. These beautiful women fell in love with three brothers from Napean tribe. Unfortunately, tribal law forbade them from marrying each other. But the three brothers were not ready to accept the dictates of the law. They decided to forcefully capture the three sisters, which resulted in a tribal battle.

During the alarming war, the Katoomba witch-doctor decided to protect the three sisters by casting a spell on them which turned them to stone. His clever intention was to reverse the spell after the war was over; but as fate would have it, the witch-doctor was killed during the war. As only he could reverse the spell, and turn the sisters back to their beautiful selves, the magnificent rock formation still exists as a solitary relic of lost love!

A Father’s Bid to Save his Daughters

This legend portrays three sisters named Meenhi, Wimlah and Gunnedoo who lived on a cliff with their father Tyawan, a witch-doctor. In the valley, there was a ‘Bunyip’ who lived in a deep hole and was feared by all. Whenever Tyawan had to pass the hole when he went out in search for food, he would insist his three daughters stayed safely behind a rocky wall on the cliff.

One day, Tyawan descended the cliff steps into the valley in search of food. On the clifftop Meenhi was frightened by a large centipede and threw a stone at it. The stone hit the centipede, but rolled over the cliff and crashed into the valley. This angered the Bunyip, who in turn, made the rocky wall behind the three crumble, leaving them stranded on a thin clifftop ledge.

It is said that all the birds, animals and fairies stopped in their tracks as the Bunyip approached the terrified girls. To protect them from the vengeful Bunyip, their father used his magic bone to turn them into stone. The Bunyip then set his sights on catching Tyawan. To escape the chase of the Bunyip, the trapped Tyawan changed himself into a magnificent Lyre Bird.

Unfortunately, as fate would have it, he dropped his magic bone in the process. Once the Bunyip gave up the chase and disappeared, Tyawan returned in search of his magic bone, but was unable to find it! The Lyre Bird has been searching for this magic bone ever since. Legend has it that ‘The Three Sisters’ stand silently overlooking the valley hoping that one day their father would find the bone and turn them back to their former selves.

Now that you know the tale, spend some time reliving it at the Three Sisters en route a scenic tour to Blue Mountains! 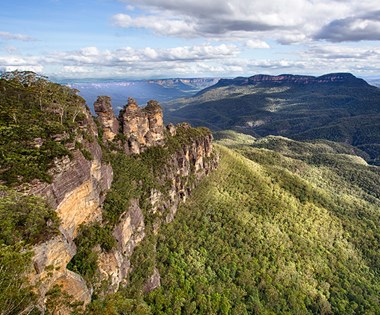 Why Are The Blue Mountains World Heritage Listed?